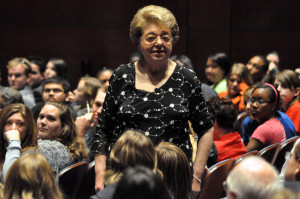 The Jackson Hole Jewish Community is honored to host Holocaust Survivor Magda Brown for Yom HaShoah (Holocaust Remembrance Day). Magda will share her testimonial with us at the free event at the Wort Hotel.

Magda Brown was born in June, 1927 in Miskolc, Hungary in a loving, Jewish home.  On her seventeenth birthday, she was herded onto a train bound for Auschwitz-Birkenau in Poland with her family and friends. Upon arrival, Magda’s family was sent directly to the gas chambers, and Magda never saw them again. In August, 1944, Magda was transferred to the Buchenwald concentration camp in Germany to make munitions. Magda and a few of her friends were able to escape the camp by hiding under piles of straw inside a nearby barn. Within days they were discovered and liberated by American soldiers. After the war, Magda emigrated to the United States and raised a family in Chicago.

Magda has been an active public speaker with the Illinois Holocaust Museum and Education Center. Since 2009, she has spoken to more than 30,000 people at schools, universities, churches, synagogues, and other events. She has given

keynote speeches at Holocaust remembrance events held by Illinois Gov. Pat Quinn and former Chicago Mayor Richard M. Daley. In 2010, Magda traveled to Auckland, New Zealand to speak at The Eucharistic Convention. In 2013, Magda received an honorary Doctor of Humane Letters from Aurora University in recognition of her “dignified, profound courage and her tireless efforts to share the Holocaust story.”Magda strives to leave her audience with three important lessons: Protect your freedom. Think before you hate. Stand up to the deniers.

Please join us to listen to Magda’s incredible story as we remember this solemn holiday. Additional details and contact information can be found on Magda’s website (www.magdabrown.com).

This event is sponsored by the Jackson Hole Jewish Community.